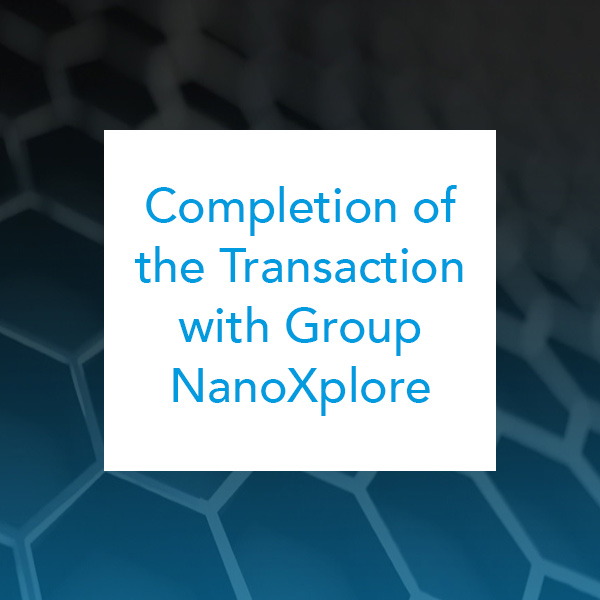 Completion of the Transaction with Group NanoXplore Inc.

NOT FOR DISSEMINATION IN THE UNITED STATES OR FOR DISTRIBUTION TO U.S. NEWSWIRE SERVICES

(To view the featured article on www.marketwired.com, click here)

Pursuant to the Transaction, the Corporation consolidated its share capital on a 15:1 basis and changed its name to “NanoXplore Inc.”.

As previously announced, Group NanoXplore Inc. completed on August 2, 2017 a private placement of subscription receipts for gross proceeds of approximately $9.7 million (the “Private Placement“). In connection with the Transaction, each subscription receipt was ultimately converted into one common share and one-half common share purchase warrant of the Corporation. For additional information about the Private Placement, please refer to the press release dated August 4, 2017 which has been filed on the Corporation’s profile on SEDAR.

As part of the Transaction, the Corporation also issued 755,556 common shares at a deemed value of $0.45 per common share (post-consolidation) as settlement for debts and the Corporation disposed of its option to acquire a 75% interest in the Mousseau West property, in exchange for which it was granted a release for money owed in connection thereof.

The Corporation also issued an aggregate of 115,556 common shares at a deemed value of $0.45 per common share (post-consolidation) to certain advisors pursuant to finder’s fee agreements and following the receipt of shareholders’ approval at the annual and special shareholders meeting of the Corporation held on August 11, 2017.

The Corporation also canceled all options issued under the Stock Option Plan and not yet exercised and issued 141,293 new options (the “New Options“), exercisable at a price of $0.45 per common share (post-consolidation) for up to 5 years from their issuance date. Of these New Options, 53,335 are considered reissued (the “Reissued Options”) as they were issued to the same individuals with an exercise price lower than that of the original options. The expiry dates of the Reissued Options remain unchanged.

There are currently 80,738,356 common shares of the Corporation outstanding following completion of the Transaction and the Private Placement.

Trading of the Corporation’s common shares under the new name is expected to resume on or about September 8, 2017.

For additional information about the Corporation and the Transaction, please refer to the filing statement and the management information circular which have been filed on the Corporation’s profile on SEDAR on August 22, 2017 and July 20, 2017, respectively.

The TSX Venture Exchange Inc. has in no way passed upon the merits of the proposed transaction and has neither approved nor disapproved the contents of this news release.