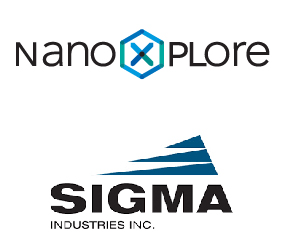 (To read the featured article on www.globenewswire.com, click here)

MONTREAL, July 03, 2018 (GLOBE NEWSWIRE) — NanoXplore Inc. (“NanoXplore”) (TSX-V:GRA) and Sigma Industries Inc. (“Sigma”) (TSX-V:SSG) are pleased to announce that they entered into an arrangement agreement on July 3, 2018 (the “Arrangement”) pursuant to which NanoXplore will acquire all of the outstanding Sigma common shares and convertible debentures.

Subject to the Interim Order, further details of the Arrangement will be included in a management proxy circular, which should be filed by Sigma with the Canadian securities regulatory authorities and mailed to the shareholders of Sigma during the week of August 13, 2018. The circular will also contain all information regarding the terms of the proposed plan of arrangement and the factors considered by the independent directors of Sigma, as well as a summary and the full text of the fairness opinion prepared by Evans & Evans, Inc.

The holders of Sigma debentures have entered into an agreement with NanoXplore concerning the acquisition of all of the Debentures by NanoXplore, on the above terms and conditions.

Soroush Nazarpour, President and CEO of NanoXplore commented: “Acquisition of Sigma will allow NanoXplore to incorporate the benefits of graphene to Sigma’s existing product lines while providing Sigma with a substantial advantage over its competitors. This acquisition further strengthens our vertically-integrated business model; starting from natural flake graphite mined in Quebec to original equipment manufacturers in transportation market.”

Rob Wildeboer, Executive Chairman of Martinrea International, a strategic shareholder of NanoXplore, commented: “I believe this transaction is a good opportunity for NanoXplore to develop and sell graphene enhanced products to transportation market and grow the overall commercial market for graphene.”

Denis Bertrand, President and CEO of Sigma said: These are exciting times for both organisations. The acquisition by NanoXplore provides Sigma with next generation products and allows Sigma to penetrate and access existing and new markets. The expertise that NanoXplore brings in the field of innovative materials will enable Sigma to advance formulations and align process developments. I believe this partnership is the best next step in the evolution of our company as we continuously strive to provide creative solutions to each of our customers and partners.”

Sigma Industries Inc. is a manufacturing company specializing in the manufacture of composite products, has two operating subsidiaries and employs 275 people. It operates in the markets for heavy trucks, buses, public transit, machinery and wind energy. Sigma sells its products to original equipment manufacturers and distributors in the United States, Canada and Europe.

Potential risks and uncertainties that could cause a material difference between NanoXplore’s financial position, results of operations and actual future performance and those expressed or implied by this press release include, but are not limited to, the following: the possibility that the NanoXplore common shares issued as part of the proposed acquisition have a lower than expected market value, the possibility that the NanoXplore and Sigma businesses are not successfully integrated or that this integration is more difficult, more costly than anticipated, the possible delay in completing the necessary steps for a possible merger of the two Corporations, including the possibility that approvals or authorizations to be obtained from regulatory agencies and other agencies cannot be obtained timely, the possibility that disruption of the proposed transaction hampers relationships with customers, employees and suppliers, as well as any other potential risks and uncertainties set out under the heading “Risk Factors” in NanoXplore documents filed with the Canadian securities regulatory authorities.