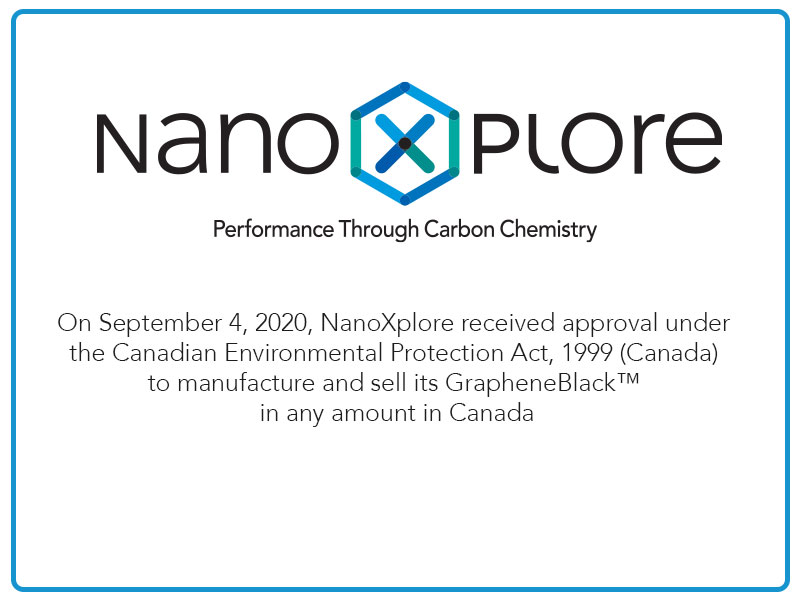 Montreal, Quebec – April 5, 2021 – NanoXplore Inc. (“NanoXplore” or the “Corporation”) (TSX-V: GRA and OTCQX: NNXPF) provides an update on the regulatory approval of its GrapheneBlackTM.

On September 4, 2020, NanoXplore received approval under the Canadian Environmental Protection Act, 1999 (Canada) to manufacture and sell its GrapheneBlackTM in any amount in Canada, for commercial uses as an additive in plastics, thermosetting composites, paints and coatings and as a component of battery electrodes.

Since its inception, NanoXplore has conducted many scientific studies to establish the environmental sustainability, health and safety of its GrapheneBlackTM. A summary of these studies was published in a peer-reviewed article in 2020 (https://www.mdpi.com/2073-4352/10/9/718/htm). As stated in the article, GrapheneBlackTM has shown no adverse effect to animal skin and lung and most importantly, no gene mutation or DNA damage was observed in the in-vivo or in-vitro genotoxicity tests via inhalation.

In recent weeks, several Canadian media published news that disposable face masks containing graphene were commercialized, without graphene being approved for such use. Further, on April 2, 2021, Health Canada issued a recall on disposable masks containing graphene, advising consumers not to use these face masks and directing all known distributors, importers and manufacturers to stop distribution and use of these masks, before Health Canada completes a thorough scientific assessment and establishes the safety and effectiveness of graphene-containing face masks.

NanoXplore would like to clarify that its GrapheneBlackTM has not been used in any masks, and that it only commercializes graphene for uses which have obtained regulatory approval.

“It is important to distinguish graphene from graphene oxide. Graphene oxide is the material that was used in such masks and has proven to be detrimental to lungs as published in 2013 in a NPG Asia Materials article (https://www.nature.com/articles/am20137). I am relieved to see Health Canada put a stop on the distribution and use of those masks.”

Additionally, for the past several years, NanoXplore has been a member of a registration consortium under the Registration, Evaluation, Authorization and Restriction of Chemicals (REACH) (Europe), where it acts as the lead registrant. This consortium has successfully registered Graphene in Europe under EC number 801-282-5.

Moreover, NanoXplore has filed a premanufacture notice under the Toxic Substances Control Act (TSCA) (USA), for the commercial use of its GrapheneBlackTM as an additive for thermoplastics, thermosets and rubbers. The Corporation believes that it will receive a Consent Order from the United States Environmental Protection Agency (EPA) soon.

NanoXplore is a graphene company, a manufacturer and supplier of high-volume graphene powder for use in industrial markets. The Corporation provides standard and custom graphene-enhanced plastic and composite products to various customers in transportation, packaging, electronics, and other industrial sectors. NanoXplore is headquartered in Montreal, Quebec with manufacturing facilities in Canada, the United States and Europe.

This press release contains forward-looking statements. All forward-looking statements are based on our beliefs as well as assumptions based on information available at the time the assumption was made and on management’s experience and perception of historical trends, current conditions and expected future developments, as well as other factors deemed appropriate in the circumstances. No assurance can be given that these assumptions and expectations will prove to be correct. Forward-looking statements are not facts, but only predications and can generally be identified by the use of statements that include phrases such as “anticipate”, “believe”, “continue”, “could”, “estimate”, “foresee”, “grow”, “expect”, “plan”, “intend”, “forecast”, “future”, “guidance”, “may”, “predict”, “project”, “should”, “strategy”, “target”, “will” or similar expressions suggesting future outcomes.